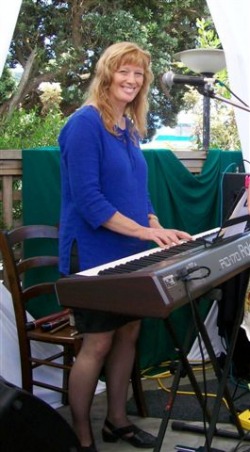 Michele (Shelly) Andrews is the youngest child in her family with 3 older brothers. Born in Wellington, she was raised in Kaitoke near Upper Hutt where she grew up with the land, bush and river at her feet and her horse and animal friends by her side.

Shelly completed her Bachelor of Science in Zoology, Botany, and Biology, before working for IBM as a Customer Education Manager and Software Support Specialist for 10 years. In her youth she loved scuba diving and became a PADI Dive master, traveling to exotic places such as Vanuatu and diving New Zealand from Poor Knight's Island to Fijordland… It's surprising how much wetsuits shrink over the years, and nowadays she prefers to be a tropical water diver, recently visiting Tonga's warm water and diving with the humpback whales.

In 1988 she trained and became an interpreter at the World Games for the Deaf in Christchurch, an amazing and humbling experience. When her first child was born she stopped work and began running playgroups and an organic food coop at her home. In 1995, pregnant with her second child, she co-founded the Rudolf Steiner School on the Kapiti Coast and when her youngest was 4 she began retraining towards a Bachelor of Education in Early Childhood Education. She now teaches in the Steiner Kindergarten in Raumati.

Shelly lives with her husband Johnny and their two girls, Laurel and Eilish (who you will hear singing in the 'And the people' track with the O'Connor family)

She is always creating: amateur plays, making dolls, felt works, paintings, and puppets, putting on children's puppet shows, compiling beautiful photo albums, and writing and illustrating a children's book. Shelly enjoys sharing these skills with others and most recently she has created the Far 2 Fabulous 'Working in the Garden' video with Olinka. Being part of Far 2 Fabulous has been a co-creative project for over 10 years now, and a great source of joy.